Andy confronts Daisy at the Pilates class she teaches. He claims that her allegations of sexual harassment against him are untrue, whereas she recalls that she had to go through four callbacks to "Sweet Charity" and when she finally refused to sleep with him she mysteriously lost out on the job.

Daisy reappears, apologizing to Andy for the allegations made last fall. She admits she only made them because she knew her career was failing, so she thought they would get her back out there. Andy then invites her back to his place, after being rejected by Portia.

Daisy appears as she is seen while Veronica and Hayley performs, On Broadway (Reprise) and she comes over to Andy and tells him that he can stop whatever he does and worry about how he needs to be with a girl who has style. Later, she performs Ghost Of Mine as she seduces the music producer to get in.

Daisy is seen performing Bounce On It. She forces Andy to compliment on her new song.

Daisy appears when she steals one of Cody's song and performs Goodbye as one of her music videos.

Daisy appears as she performs Play Dumb and she winks at Andy.

Daisy appears backstage as she was about to ask Andy to marry her and he turned her down harsh and she threw a hair dryer at him.

Daisy appears at The Tony and recieves a award.

Daisy Blackmails Derek to give her Ana's role of the Diva.As she is the Diva she sabotages the show coming from orders from Terri and Morgan stopped her before it was too late and Daisy was upset about that and stormed off.

Ghost Of Mine (Moore Hayley)

Bounce On It (Shooting Stars) 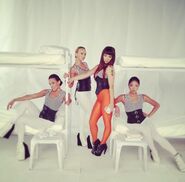