Marissa was dating Charlie Swift at the start of the season, though it was revealed that she lost her virginity during a one-night-stand with after she said she felt "fat" and he got her drunk on wine coolers. She became pregnant with his child Leslie, and told Charlie that the baby was his. Marissa was happy after giving birth to her lovely baby girl Leslie in the series finale, but she gave her up for adoption. She was introduced as one of the main antagonists throughout the season, Marissa becomes a little more nicer and open to Meso-Teens (eventhough, she can still show signs of her bitchiness) she also begins a new slow relationship with Cameron James. Kitty was competing with Marissa to win Charlie's heart, but when he discovered the truth about her baby, he left her and started dating Kitty. She later started a relationship with Kenny, but broke up during the summer.

I Say A Little Prayer (The Callbacks)

You Keep Me Hangin On (The Callbacks)

I Will Always Love You (Surprises) 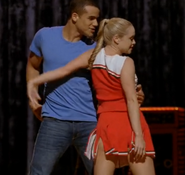 Everybody Talks (Kenny Thompson) (The Callbacks)

Baby, It's Cold Outside (Charlie Swift) (The Callbacks)

Community content is available under CC-BY-SA unless otherwise noted.
Advertisement